When you think of going to a foreign country, what do you look forward to most? The people you might meet; the places you might stay; sights; sounds; culture; flavour; economy; politics? Of course you consider it all.


What about; “I wonder if the wicket takes spin?” “How quick is their opening bowler?” “What’s for tea?” If not, then you’ve never experienced the ups, downs and extraordinary laterals of international cricket. Well, you’re in for a treat, because they let us into Argentina despite the UK government’s current activities, and let us stay and play. Oh, and eat - more of that later. Lots more of it, probably!


I like the idea that a journey starts when you want it to. For me, it was NOT Tuesday morning, leaving my wife sleeping while I went to work before heading off for two weeks playing outside in South America. It was leaving work and joining Skip for wine and curry with Smurf, Paulo and Swiss 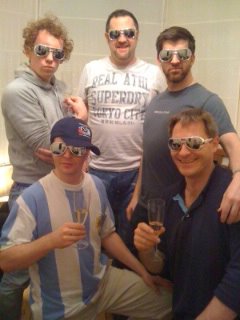 Whoever thinks that wine and curry is a good idea the night before you plan to sit in a plane for up to 16 hours is probably on tour with us right now, but doesn’t think it’s a good idea anymore. And if you think this is the campest picture since the Village People “dragged up” at the Blue Oyster, you’re probably right!


With a night of “gentle” drinking and “innocuous” spices behind us, we managed between 1 (Paulo/Smurf) and 4 (Swiss) hours sleep before the taxi arrived at 4am. I will never question a cab drivers dedication again surreptitiously arriving in the dark at Terminal 3 with ALL our bags!


There were sore heads, rumbling stomachs, nerves, excitement by the bucket-loads (literally) and that was simply playing cricket with a tennis ball outside T3 at 5am. It heralded great things!


There’s something very special about a dedicated group of people heading into the relative unknown to share something spectacular. And 14 blokes in full tour regalia (blazers, ties, caps, ironed shirts and cricket bags) is a pretty spectacular sight! Especially as we celebrated with Barbarossa’s timely infusion of champagne. We were definitely ON TOUR!


The simplest check-in I’ve ever experienced led on to the easiest security check I’ve ever known – although, inevitably, someone had to do it and Swiss got pulled for a full body scan. He does it deliberately, I’m sure. And then there was the idiot who came through with a retractable police-style baton claiming it was for personal protection. Not one of our party thankfully and NOT travelling anywhere except fast-track to a cell!


We, on the other hand managed to turn all sorts of heads. We were asked if we were an international sports team to which there is only one answer : YES. Were we famous? There’s only one answer – WE WILL BE!


The search for beer was finally called “OVER” when the bar opened at 7. We haven’t looked back, since. We can’t. If we’re not looking forward we fall over!


Buenos Aires is bloody hours away – and on our flight that means nearly 13! I learnt some Spanish, Skip learnt some manners and Lumpy learnt that you can’t drink the bar dry on a plane anymore. It’s not that they ran out… they just won’t let you do it! – even when you’re being polite and not snoring! No, seriously Damo, they won’t! We tried for you, we really did.


For the last year or so, Skip and I have been in contact with Gary Savage, who has arranged pretty much everything for the Argentina leg of the tour. This is a man who has played sport at a very high level, coached a national team, set everything up for us. To that end, he was there to meet and greet, talk us through what was coming up and is our contact for our time in Argentina. And what a great guy! For the love of all that is cricket, we cannot let him down.


We will not let ourselves down.
We are ‘Dors. We are on Tour. And now, we are in Buenos Aires!
Watch out BA!