On August 17th, 1896, the Belgrano Athletic Club was officially formed. The first recorded cricket match was between a select Belgrano XI and the MCC in 1912. They didn’t know what hit ‘em on the 17th March 2012. No, really.


Talk the night before was of tactics and expectation, passion and excitement. As it should be. Breakfast was a chaste affair. Croissants, Argentine omelette, bread, ham, cheese, coffee, coffee, some more coffee, please. Rarely has a side been so quiet and eaten so much.


Our arrival at the Belgrano Athletic Club was a splendid affair. Fully togged in tour regalia, we proudly strode to our rightful places in front of the beautiful Belgrano pavilion; home to pennants and shirts from the mighty Argentine teams of yore, the mighty Afghani teams of not very long ago and now, one hopes, of the Corridors on Tour! 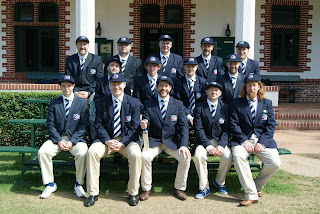 We sometimes flatter to deceive but we do not over-egg – not even curate’s versions. We do take things as seriously as we can as long as there’s fun involved. So a spirited warm-up net and fielding practice set us up well for our very first match on tour. Genuinely, the Corridors have never toured. Anywhere. And our first game is here. *pauses for breath amid frantic search for paper bag for "the breathing in and out of" of*. In Buenos Aires, Argentina. Oh yes!


Frantic rushing around by Mars meant we have film of a momentous occasion. Skip lost. Senor Arizaga chose to field. Skip was going to bat. This augured well.

Mars and Russ strode past cameras and adoring crowds – Panda with a handycam! – with Mars insisting on pulling rank and taking the first ball. A full toss. On the leg stump. Now that’s the kind of ball to open your international career with - pushed for a single.


With a crowd growing at the club house and the pavilion balcony filling beneath the heat of a blazing late summer sun (which meant a cool 28C for the Argentinians and a pulsating hell-hole of heat for the Dors) Russ lost his head. No, he didn’t. But he shouted “Yes” a lot. And a fuming Mars was on his way back to the Pavillion without even checking with the umpire. Run out. Dors were 1 wicket down with 2 runs on the board in the 2nd over of their first international match.


Nerves. That’s what we’re putting it down to. Or voles, but there’s no evidence of that and no one’s going pellet proofing to confirm!


Sadly, under the watchful eye of former Northampton ‘keeper Toby Bailey, the ‘Dors made heavy weather of some accurate bowling. Unable to pick gaps or even hit the ball hard enough to get through the field we haemorrhaged wickets when they should have been haemorrhaging runs.


Allow me to put this into context; this was the first game in our season but the last game in their season and, although some hadn’t played much this season, there were a number of former international players in the side. I’m not making excuses. It’s true.


With Dawse struggling to score, he made a frantic bid for freedom and was on his way back to the hutch for 2. 18 for 2.
Swiss left the first 4 balls complaining they were far too mobile. He then didn’t score off the next 2 either, but that was out of habit. Sadly, while looking very comfortable and on a happy 6, he chose the wrong ball to try and hit. He stayed on 6 and walked disconsolately to the changing rooms with his stumps in tatters. 32 for 4. Russ, in the meantime, had been finding the middle, sort of.

Skip tells of derring-do, rampant run-scoring, frantic singles. It’s true. Just not today. Russ ran out of his ground trying to force the pace. Stumped, he was. 42 for 6 off 13 overs. With Russ departing for the Dors top score of the day, 25, Cap’n Mallard, my Cap’n Mallard kept middling the ball straight at fielders .

New blood to the crease brought Andy Kinnear, aka Smurf because of his penchant for light blue beanies. Nerves again! And then the most peculiar dismissal. What looked to be bump ball claimed by the bowler as a catch and Smurf walked! Definitely nerves! 57 for 5.

Forge tested the bowling for but a short while before letting Behly have a crack and suddenly we had the first 4 of the innings. In the 20th over!
And then Forge was gone. 72 for 7
Left handers and run-outs. Now what’s that all about? First Mars, then Behly who sweated his way off the field for a quick-fire 11. With the wickets tumbling we were now at 80 for 8. The opposition had never heard timbers collapsing so quickly and within a matter of minutes, the Crab’s shack was toppled, Lumpy had his first run on the board on tour and Panda’s shot choice left him with the necessary duty of entering his own “0” in the scorebook.


85 all out in 24 overs; 3 batsmen into double figures; Russ top scoring with 25 and extras hitting 10. And their skipper (did I say he was an Argentine International player?) with 3 wickets and a run out to his name. Not auspicious but at the same time there was definitely hope.
One of the most interesting things about touring is that you never really know anything about the opposition. Are they a batting side? Do their strengths lie with the ball? We were confident that we could hold our own in the field. Mars led an impromptu team talk and the game was there for the taking.


Step up Behly! Step up and crack the castle! Which is exactly what he did with the second ball of the innings, spreading the timbers like a Spanish fan in the hands of a tango mistress - unconventionally hitting half way up with a full bunger, but beggars and choosing just don’t go.


This brought Skipper Arizaga to the crease, with his high left elbow and his terrifyingly vertical bat and steady eye. An innings builder if ever I saw one, but he hadn’t played all season. This was ours.


With Mars at the other end wobbling the ball through the air just enough to make the batsmen think very hard about where to hit him to, Behly was bowling with purpose and was very unlucky not to have a couple more wickets with some streaky edges not going to hand.


When it’s not your day, well, it’s just not your day. And although Mars picked up a wicket, clipping the top of leg stump with some short-pitched filth that surprised the batsman by just being straight (38-2, W Kirschbaum out for 18), there was power and precision to the Belgrano’s batting. We were sunk. Where we struggled to find the boundary, they appeared to bend time and space and bring the boundary to themselves. The wonderful sound of leather and willow in perfect batting harmony becomes a fielder’s theme tune of horror. And this had become an afternoon of theme tunes.

Smurf struggled to find his line and length against an increasingly confident partnership and although Swiss had them questioning their very existence at times (you could see the question in their eyes “what am I doing here, I can’t hit him!”) Senor Arizaga’s bat seemed to grow in size and he polished off the innings with a very well made and assured 56 Not Out, with former Argentinian batsman B Roberts on 7. When I say he finished it off, he reached 50 and then hit a six over extra cover to win in 12 overs, or 45 minutes or, if you prefer, with consummate ease.


We have much to learn and much to celebrate. We may have been soundly beaten, but we have broken records (first ever international tour match for the corridors), we didn’t lose a wicket with the first ball of our innings but we did take a wicket with the second ball of theirs. We have now had a proper game – our first of the season and their last game of the year – and although match rusty and nervous there is plenty to work on and be proud of. Hey, how many individual clubs that don’t have MCC in their title can say they have played at the Belgrano Club in Buenos Aires? Yeah, thought not.
Our opposition set a stonking BBQ and laid on the beers and we shared a presentation of pennant (from the Dors) and Belgrano club shirt from the home team. Both Skippers offered words of wisdom and friendship and a plea for more interest in playing BA. This is an amazing place. And we are not done yet! It is already proving a massively exciting trip and we’ve only played 1 game.


We stand at 0 for 1. We have another game on Sunday. That statistic will not stand for long.