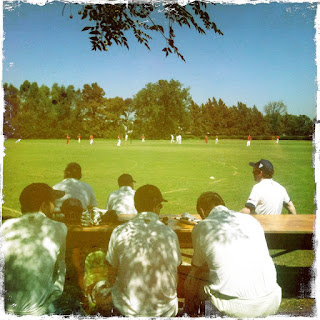 We’ve been a bit tardy with the match reports. Someone’s going to get a BIG fine. Talking of which, Rusty has a sheriff’s badge and is dispensing justice with Cinzano. More of that another time. For now here’s:
Sunday, 18th March, 2012

‘Things’ as someone once said, ‘can only get better.’ And look how that turned out. Making predictions is a dangerous business but flying out to South America on the Ides of March (that’s the 14thcalendar fans) may turn out to be one of the poorer decisions of our cricketing careers. It was certainly one of Julius Caesar’s less successful days at the office. Personally I prefer ‘the only way is up’ as a leitmotif, but even that has its drawbacks. Take today for instance. Who would have thought that in the second decade of the 21st century, a touring team to Argentina could be bowled out for 85 in the first match, take a good look at themselves, analyse where they went wrong, apologise for rustiness,resolve to do better blah blahblah and then be skittled for 72 in the second? Well, given our form and history maybe we should have seen it coming. Maybe someone should have told us what was about to befall (Wyrd Sisters anyone? The Oracle at Delphi?Ladbrokes?) But even clenchedin the jaws of defeat the Corridors will more often than not take the positive. A healthy gumline for instance.A really nice smile. Or even just a lack of fillings.

For starters there were the surroundings. St. George’s College is the sort of place that teacher training students dream of before ending up at some grotty comp in Deptford. Boasting, or at least mentioning in the strongest terms, fantastic facilities on a broad and leafy campus in brilliant sunshine with enthusiastic, bilingual children, St. George’s is a kind of sporting Hogwarts. The college gates swung open to allow the team bus in and from then on we were in the capable hands of Rob Prata, Deputy Head, mine host and congenial assassin. First off was a tour of the school to take in the best that the youth of Buenos Aires’ can expect, and expect away boys and girls, followed by a pre-match tea in the refectory. Those of us looking for some light relief from the meat assault on this tour were sorely disappointed as plates of salami and ham unfolded before us. The only mercy came in the form green leaves and slices of redness…’lettuce and tomato’ the guidebook offers.St. George’s also has a theatre and swimming pool. I don’t know why I shove those two things together; I just find it rather pleasing. Mars does too. A lot.

For the second time on TOUR the skipper lost the toss and could be seen at naughty boy nets later that day practicing his calling so we must hope for better at Hurlingham. In the meantime it was Dors to bat first. Mars and Russ, our very own Langer and Hayden, or Little and Large if you prefer, went to mow a meadow. We have the benefit of playing on all-grass pitches on this portion of the tour and this one proved to be…interesting. Under clear blue skies with the college bells tolling in the distance, and with a couple of young medium pacers operating at either end, Mars found himself paralysed by an inability to time a ball that refused to come on to the bat but preferred to keep low. Or high. Or jag left. Or right. Or not. Russ was similarly stymied by the desire to not-run-out-our-top-batsman-again-please commandment from on high so the going was slow but at least we weren’t collapsing. Not yet anyway.

Just for once we had a proper scorer as well so the Book of Numbers shows all sorts of exciting stats like ‘balls faced’ and ‘time at the crease’, the sort of things that regular cricketers take for granted. The best we can normally hope for is a wagon wheel with tea. So the book shows that Mars finally got international runs; 22 of them in fact. Not polished and effortless like he usually manages (when Russ isn’t sabotaging his holiday) but gritty, freshly ground, grafted runs. It was Russ who fell first however having troubled the scorer to the tune of 11. Gibson, operating from the theatre end, eventually tempted Russ to flash at him which isn’t normally the done thing at a school, and the player who sunk Mars at the Belgrano was first to go, taken by the keeper. So Paulo was in for his first game on tour having run the book for the opening fixture, saved up his pennies for years and learnt Spanish especially. Paulo got the sort of ball first up that even Test cricketers get night sweats about. One that calmly pitches on a length and then rears up at your face like some sort crazed badger. It was as much as the young lad could do to get his thumb to it before it took his nose off. The keeper gratefully, and rather gracefully, took the catch. Paulo was back in the hutch. Two games.One innings.One ball. One minute. One duck…of the golden variety. In fact we may return to open a Chinese restaurant of the same name to commemorate the amount of canards that we have collected thus far.
Swiss Tony took to the wicket and fared little better, facing just two balls for his nought. Skipper Mallard joined Mars at the crease and, as usual, chuntered on about ‘forging a partnership’, ‘using up the overs’ etcetcetc before watching Mars play all around a shot that, ordinarily, wouldn’t have troubled the big biffer. It disturbed him greatly and his middle stump even more so. The Smurf strode to the wicket with memories of his bump ball at the Belgrano still fresh in his little blue mind. A few shots showed early promise, and the Smurf will deliver at some point with the bat, but four balls later he got a real Gargamel of a ball which he spooned to mid off before trudging back to join the rest of the not so merry crew. Mallard, meanwhile, was stroking the odd bad ball around in the company of Mr Richard William Forge who wears a helmet not to protect his head (which is indestructible) but to protect the opposition from the expression of sheer fury that he wears when he bats. 16 balls he faced before edging one to the keep off the bowling of Altuzana. Mallard followed soon after for 8, going after one from the off-spinner Kennedy and snicking a difficult chance to Giles Gibson, late of England, who took a good catch. Behlly also departed with a hefty nothing from the same bowler and it was only the Crab who showed any kind of resistance to post a massive 9 including a boundary. Boundaries have been a rare and elusive commodity in this hemisphere with tight, slow bowling and huge, grassy outfields to slow up the ball…they don’t seem to trouble he opposition so much though.
Barbarossa and the Panda didn’t trouble the scorer unduly, the former with a zero and the latter with 2 but KP did at least present a straight bat which he then carried from the field…not for the first time in his Corridor career, and certainly not the last.
Corridors 72 all out including 17 extras.Hmmm.

As with Belgrano a different Corridor side showed up for fielding duty. For some reason we really come alive with ball in hand and if we ever win a toss and field first, someone is really going to get it. It was R. Vozzi who got it first on this occasion. Swiss Tony, rapidly becoming known as ‘The Child Catcher’ and thus ‘Torpedo’ beguiled the child before him who had no answer to Swiss’s fizzing deliveries and eventually lolloped one up to Behlly at mid on. The insouciant Australian did his best to drop it but eventually held on for the first wicket of the day…Corridor wise at any rate.

With the child removed it was time to bring on Behlly who, channelling the spirit of Merv Hughes and Dennis Lillee (pictures of both in full cry just happened to be pinned up in his apartment), bowled with what is known as ‘vigour’. It was too much for batsman Costa (brilliant names on this tour) who went after the bowler and pulled hard at one that sat up to him. Now, I don’t know if you’ve ever seen a flying Panda. I doubt it since, as a rule, they tend to be rather passive creatures with little on their mind except bamboo and where the next bit of it is coming from.  Our Panda, however, is a different creature altogether. The ball was smoked by the batsman and everyone turned to see what sort of orbit it would enter…everyone but the Panda that is. Leaping high and to his left the black and white wonder stuck out both paws on his wrong side and, ball safely pouched, re-entered the earth’s atmosphere at a terrible pace. The Panda who fell to earth had little time to ponder his broken body as he was engulfed, and possibly impregnated, by several of his team mates.

It was just the sort of fillip that we needed and with our tails up Angeletti came to bat. But the lad couldn’t handle the heat in the kitchen and a rampant Behlly sent him back with a fat duck. It was, perhaps, a harsh lesson for the boy but then, isn’t that what schools are for? Altuzarra came out on a hat-trick and gamely blocked the first ball which he followed with a fist pump to the girls on the boundary…two golden ducks before this game apparently. Unperturbed by this moment of brilliance Behlly calmy fired a scud into the batsman’s foot which then ricocheted into the stumps. The young batsman protested the wicket, a schoolboy error, before being calmly ejected by Signor Prata and Alan the umpire.

New kid on the block Smurf collected a couple of scalps by removing opener Kay for 18 with the assistance of a little Crab, and then barged through Gibson’s stumps for two later in the innings. The Blue Assassin has proved his worth both as a player and a tourist on this merry jaunt. Long may he be a Dored.

So, seven wickets down and a glimmer of hope for the Corridors but Duggan and Griffiths, taking on Behlly’s lusty bowling hoiked the ball over the predatory infield and ran the score to ground. A loss then but a more creditable one followed by empanadas and Quilmes aplenty. Rob Prata invited us to use the school pool and, well brought up boys that we are, we didn’t refuse and Smurf’s handstand entry and Swiss’s bombing would have put Tom Daley to shame.

A post match get together with the oppo followed and we won ourselves a dozen new friends…easy to do when you’re on the wrong end of a beating. The callow youths of St. George’s wondered if we were named after the Corridor cricket that we played at public school. Fat chance.